From Xhodon 2
Jump to: navigation, search

With heroes, you can command hordes of creatures. You can attack sentinels or other players, suppport other palaces or transport resources.

The number of heroes you may control depends on the level of your Hero Statue.

The button "Heroes" in the menu bar leads to the hero control menu.

Button Heroes in the Menu Bar

After you have conjured your hero statue to level one, you may create your first hero. In the hero menu, click on the button labelled "Create a new hero". Every fifth level of the Hero Statue, you can create one additional hero. Across all your palaces only the Hero Statue with the highest level counts for this. You get the first hero free of charge, but additional heroes will cost an increasing amount of mana to create.

Creatures must be lead by a hero, otherwise they can not leave the palace.

To transport resources or Dragon Eggs, you should use a Pegasus. These heroes can not attack, but have the great advantage that they can not be attacked either (neither by enemy heroes nor by Crystalline Catapults), as long as they are not standing on a palace. You do not need to conjure you Hero Statue higher to create additional Pegasus heroes, but the mana cost will increase for every new Pegasus.

On the wings of magic, heroes rush through the world with a speed of 1 tpa. This is especially relevant for spy attacks, as the speed of the complete horde is determined by the speed of the slowest unit.

Experience bar of a hero

Every time a hero rises one level, he also gains one status point. Under the tab status, you can assign these points to the attributes of your hero. This costs one rune or four hours worth of Mana production by your main tree. 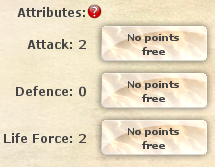 Attributes of a hero

Defence
The same applies for defence. Defence does not mean an armor value, but an attack value in case the unit defends. The enhancement here is 2.5 %.

Life Force
Each point in Life Force increases the life of all creatures led by the hero. Again, the percental increase depends on the life value of the creature. For a creature with life 1, the enhancement is 1.1 %.

The name of a hero is displayed at the top of the hero screen. By clicking it, the name changes into an input field and a new name can be entered.

Under the tab "Status" you can change your hero's defence status. Knowing about defending commands of your hero makes it easier to defend your palace alone or with others. A clever aggressor should always inform himself know about their target's possibilities, too.

If you set the defense status of your hero to normal, your hero will only defend your own or allied palaces and heroes in the same valley. Palaces always have the defend mode normal. If an allied hero stands in your palace, your palace will join the battle, if your allied hero is under attack.

With the status area defense, your hero will defend all allied palaces and heroes in the same area.

In the valley defense status your hero will defend everything standing in the same valley as him. It won't make a difference whether friend and enemy is being attacked, and even neutral creatures like sentinels (level 2 onwards) will be defended.

Transfer of resources and creatures between heroes and the palace

Button Heroes in the Menu Bar 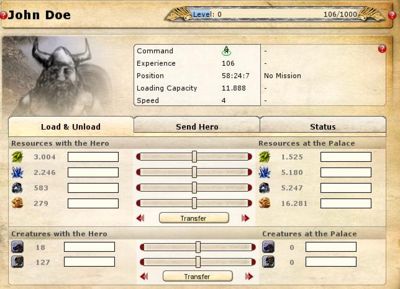 Transfer of Resources and Creatures

Click the button "Heroes" in the menu bar. To the left you will find a listing of your heroes and coordinates of their current positions. Choose the hero you want to assign creatures to and click it to get to the hero menu.

You will find a list of the resources and creatures of your hero on the left and a list for the palace or area it is standing on to the right. You can now enter the number of the creatures you want to transfer to or from your hero and click the button "Transfer".

You can also use the slider to change the number. If you click the red arrows nest to the transfer button you can transfer all creature or resources at once.